The Internet of Things Is Revolutionising Everyday Healthcare

Imagine a time in the near future where a diabetic can have their blood sugar levels assessed by a doctor halfway across the world or have their insulin levels changed automatically in response to what they eat and be able to receive medical advice without leaving the comfort of their home.

This kind of convenience is not too far away. The Internet of Things (IoT) is making deep inroads into healthcare, making chronic illnesses more manageable and medical advice more accessible to the average person.

Read More: The Internet Of Things Explained & How To Benefit From It

The IoT is already transforming the way we live our lives – a report by Verizon estimated that 73 per cent of executives are either researching or currently deploying IoT technology. It is highly likely that you or someone you know are currently wearing some form of technology that tracks part of your personal health, habits or routine.

With fitness trackers including apps on smartphones increasing in popularity and use there is an unprecedented amount of data being stored waiting to be utilised. The amount of information will only increase. A report from Tractica suggests approximately 430 million IoT devices will be shipped out each year by 2022.

The IoT is poised to have a huge transformative effect on the healthcare industry, partially driven by technological advancement and partly by economic necessity. Healthcare expenses have been rising steadily over the last decade and according to a report by McKinsey, healthcare costs in the US alone represent almost 20 per cent of its GDP. To date, fitness trackers have largely been utilised for activity based data accumulation but is moving towards more sophisticated healthcare and health-focused applications.

Sign up to AtlasTrend for more insights on trends transforming our society and a simple way to invest globally.

This is an alarming statistic in itself and is already being addressed with wearables that can track heart rate and blood pressure, sending reminders to take medication and transmit relevant data to healthcare practitioners. It is estimated monitoring and treating patients with chronic illnesses using IoT devices could potentially save up to US$290 billion annually in the US and US$1.1 trillion globally, according to McKinsey.

These estimates are based on two drivers of value, cost savings in treatment and the value of longer lives and improved quality of life where IoT helps manage chronic illnesses.

Further, with an ageing global population in both developed and developing nations, healthcare costs will add increased strain to existing healthcare systems. Significant disruption is needed to ensure more efficient and cost effective medical services. According to US Census Bureau, the elderly population is expected to double globally by 2030 and this estimate is likely to be too conservative as developing countries like China are starting to feel the growing pains of a middle-class ageing population.

An industry poll conducted by Ericsson showed that 60 per cent of consumers believe that wearable technology will help them lead a healthier lifestyle, with 130 million consumers worldwide using fitness trackers today. The same study found that 39 per cent of patients with chronic diseases believe that online consultations with doctors make it easier for them to manage their health than face to face consultations.

Patients are disillusioned with long wait times, non-availability of doctors and the inconvenience of appointments and are ready to incorporate smart devices as a part of routine health management. As barriers to this technology (such as worldwide internet access, expensive sensors and power chips) are being slowly lowered, it is only a matter of time before the IoT becomes an integral part of health monitoring and management revolutionising the everyday healthcare industry. 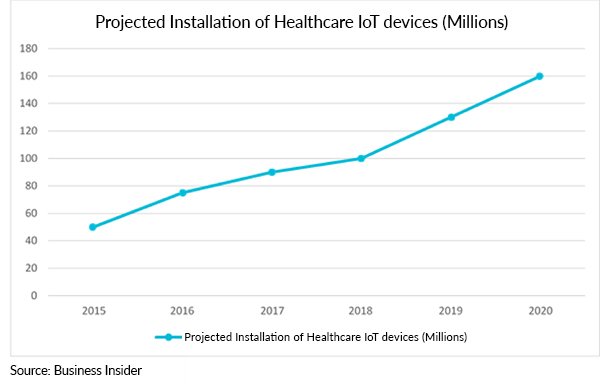 While we are already seeing the foundations of a connected world with roughly 8 per cent of medical providers in the US using digital records to manage information.

The impact of big data is still relatively small with healthcare organisations being unable to fully integrate the massive amounts of data collected into any meaningful tailored individual health management. The healthcare industry wants to embrace and incorporate IT services but is understandably, focused on patient privacy and data security.

However, a combination of IT services with healthcare practitioners would actually more likely alleviate some of the risks regarding information standards, interoperability and data security which make up over 50 per cent of executive concerns surrounding the application of IoT.

In addition, for IoT to be cost-effective and widely adopted around the world, the price of sensors and other components will need to continue to fall. The cost of sensors such as accelerometers, pressure sensors and gyroscopes used in devices has fallen 9 per cent a year on average in recent years, but further reductions are needed.

As newer technology is developed (aided by the decrease in prices of sensors and other components), the hope is lower-cost healthcare systems to justify public health programs and insurance companies paying for these IoT devices.

Further for IoT to be successful in the healthcare industry, more work needs to be done on refining and improving predictive analysis. Predictive analysis is the most positive tangible outcome of IoT and can be used to provide early warnings about potential threats to a patient’s health allowing a practitioner to proactively combat the issues before they develop.

Sophisticated algorithms will be needed along with computer engineers to create predictive capabilities within devices which physicians can consult. This further cements the need for a harmonisation of IT and healthcare services.

While these are some of the challenges that must be met before we can live in a truly connected world, the use IoT devices in the healthcare sector is likely to continue increasing and with it, the possibility of more affordable and effective healthcare treatments for us all.

Kevin Hua is the co-founder of AtlasTrend which is a member of the Which-50 Digital Intelligence Unit. Members contribute their expertise and insights to Which-50 for the benefit of our senior executive audience. Membership fees apply.

The Battle for the Digital Economy Ultimately Rests Not with the Cloud, but with Data

Ethics by numbers: how to build machine learning that cares

Kevin Hua is a Co-Founder of AtlasTrend. AtlasTrend’s team is a group of highly experienced professionals across multiple disciplines. In particular, the investment team alone has over 45 years of combined investment and financial markets experience. This includes a strong track record of investment management experience having managed over $2 billion for investors in listed international equities. AtlasTrend was created in 2015 to build a new investment service to help our customers learn and invest with purpose in long term world trends

Smart Device Manufacturers Must Address the 4 Ws of Security

Telstra and Microsoft extend partnership on digital tech and sustainability